1) Signalling people**
Have you ever seen the people on an aircraft carrier, or in the mountains, signalling an helicopter to get down at a specific point?

This puzzle is inspired by those people and signals.

Did you know….
Body language provides a much better cue than facial expressions when judging if a person has just gone through severe emotions?
See here for more details.

1) The five pirates**
Five pirates have 100 gold pieces. They are all perfect logicians, greedy , and blood thirsty.

They have a strict order of seniority, and the most senior pirate makes a proposal how to divide the 100 gold pieces among them. The pirates vote on the proposal. If the proposal is accepted (more votes for than against, or the number of votes are equally divided), the 100 gold pieces are divides as per proposal.
The gold pieces can not be divided into fractions, and all pirates are know that the others are logical too. Moreover, they don’t trust each other, so any deals among the pirates are not possible.

When casting his vote, the priorities of each pirate are:
I) Stay alive himself
II) Get as much gold as possible
III) Kill off other pirates
All 5 pirates are perfect logicians, and immediately sees the result of any proposal and will, with the a fore mentioned priorities in mind, cast his vote.

Which proposal should the most senior pirate make?

2) Five pirates again**
This puzzle is the same as above, with two changes:
a) If the votes on a proposal are equally divided, the proposal is rejected.

3) How many pirates?**
How many pirates can take part in the division of 100 gold pieces, with the rules from puzzle 1, with the first one still surviving? And how does the pattern develop with an ever increasing number of pirates?

There is of course no intrinsic reason why the persons in this puzzle should be pirates. They could easily well be immigrants from Pluto on Mars, or be hula-hoop girls on a remote pacific island. I have retained the pirates as figures because people are most likely to search for this word when trying to study this puzzle.

If you solved it, we have the solution to 1

If you solved it, we have the solution to 2

If you solved it, we have the solution to 3

What is the lowest entire number that, when spelled out, contains the vowels A, E, I, O and U exactly once?

This puzzle was published before in Games and Puzzles No. 12, April 1973, and probably many other sources.

If you solved it, we have the solution so you can check yours. 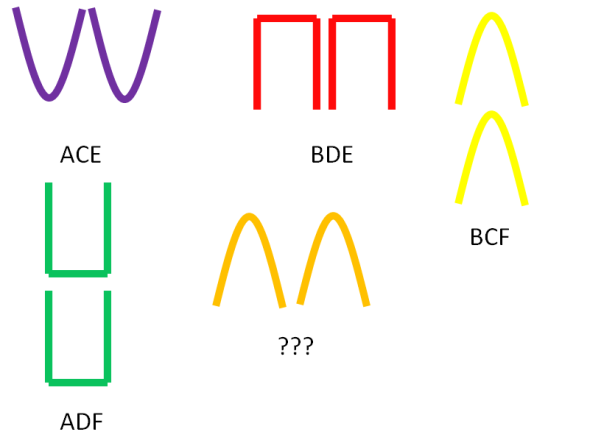 As in previous puzzles of this type, every letter corresponds with a property of the figure. 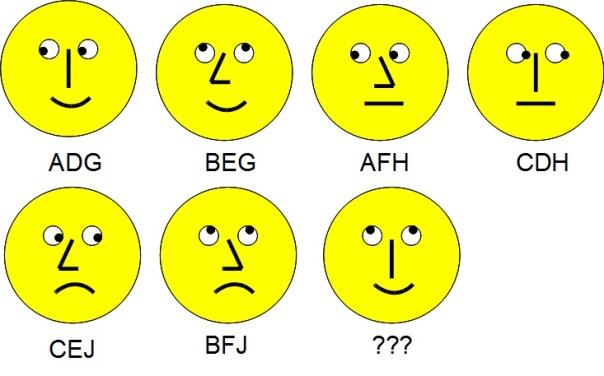 As in previous puzzles of this type, every letter corresponds with a property of the figure. Which letters should replace the question marks?

Sounds difficult? Not at all.
Try your hand at a simple 6×6 example: 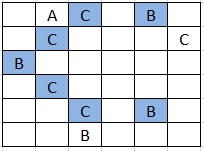 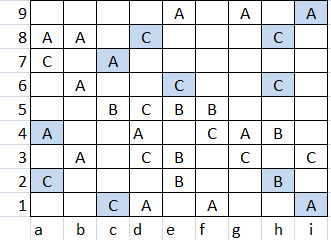 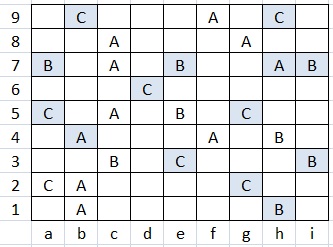 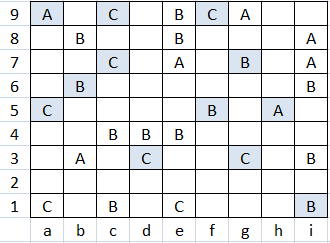 To solve these puzzles, I suggest that you print them and use pencil and paper. You can check your solutions: nr 1, nr 2, nr 3, and nr 4.

When I started this blog it was one of my aims to give some international publicity on the Dutch puzzle scene, and I think this is the first post that serves this goal.

The Trinairo is a type of puzzle published by Sanders Puzzlehobby BV in Vaassen. In the Introduction of booklet no 5 Leo de Winter claims that he invented this type of puzzle after he invented the binairo (I hope to treat that puzzle type in a future post) in 2006. He mentions that the first prototype was published in Fall 2011.

Sanders puzzel publishes these puzzles 13 times a year. You can order them from their site